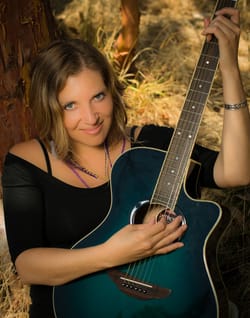 photo by Dee Gandhi deegandhi.com
Theda Phoenix
...a songwriter and intuitive singer, whose intimate and authentic performances reveal a passion for creating a love-centered life, concern for the conscious evolution of humanity and preserving our beautiful earth. Her recordings are diverse, ranging from the ethereal and meditative sounds of crystal bowls with harp and drums, to the eco-folk, inspirational songs she performs with her guitar.  A recording artist with 4 CD’s under her belt, Theda has performed at local music festivals in BC and the Ottawa Folk Festival.  Born in the BC Rockies and raised by the ocean, she has an authentic, enchanting sound.  Her angelic and powerfully melodic, dynamic voice, coupled with provocative lyrics conveys a deep love for life on this planet, the natural elements and human connection. A free spirit, with a voice comparable to Sarah McLachlan, Theda loves to compose spontaneously as well as write songs in a style reminiscent of Joni Mitchell.  Discover the soulful depths of a Divine Muse.


DETAILED BIO
Born in the ’70s to artistic, hippie, back-to-the-land parents in the mountains of eastern British Columbia, Theda spent her first two years in a small town called Golden.  Her father, a movie buff with a passion and gift for astrology, predicted his baby girl would possess a flare for the stage, so named her after Theda Bara, the famous silent movie actress from the 1920’s. He also gave her the name Phoenix, the mythical bird that rose from ashes and symbolic of the Scorpio energy of transformation, death and rebirth.

In the mid 80’s, after living in the seaside town of White Rock, BC, Theda moved with her mother, artist and author Yvonne Maximchuk and younger brother to Echo Bay, a small, island community in the Broughton Archipelago on the West Coast of British Columbia.
Living on a float house with no electricity and only boat transport gave her a close experience of the natural world, playing outdoors and spending time on the water with orca and humpback whales, dolphins, seals and eagles. Without the typical urban distractions she was able to attune to the rhythms of coastal life, witnessing the cycles of big tides with the full moon and the yearly return of the salmon to the rivers. This experience imbued her with a recognition of the innate spiritual intelligence flowing through this planet and all of life. It has inspired her spontaneous singing style, a celebration of this essential creative life force.

As a young adult Theda was strongly called to facilitate healing and began exploring different modalities including Aromatherapy, Reiki, Massage, Huna, Yoga, Solution Focused Counselling and Coaching, Hypnotherapy, as well as a variety of personal development. She worked in a healthfood store and Vancouver Spa's practicing holistic bodywork.  Eventually she discovered that her lifelong calling to sing would be one of her most powerful healing gifts.  As well as writing songs she began to sing intuitively, channeling from the heart, creating songs on the spot and performing music spontaneously both making up songs with lyrics on her guitar and harp and also sounding intuitively with Crystal Singing Bowls, and Native Drumming. She is passionate about living life and creating music from a place of sacred, playful, creative, spontaneous, self- expression and innate spirituality.

Theda performs at music festivals, conferences, weddings, and a variety of special events. Such have included the Ottawa Folk Festival and Ottawa Sound Healing Conference, Duncan Showroom, 39 Days of July Festival, Centres for Spiritual Living.   She has sung at events with authors and speakers such as Deepak Chopra, Dr. Joe Dispenza, Dr. Christiane Northrup, Oriah Mountain Dreamer and Dr. Caroline Myss.  She has also sung and played with sound healing Jeremy Sills from Ottawa and Kirtan artists Shimshai from California, Wade Imre Morrisette, and at the Queen Elizabeth Theatre with Nutone Artist Will Blunderfield﻿.

Theda’s musical studies include the classical voice curriculum at Vancouver Community College, songwriting and performance workshops with international recording artist Julie Blue, and classes with Pat Pattison from the Berklee College of Music and more recently, she has trained in Soundwork with Gary Diggins in Toronto.

Her song “Light in you” off her album “Legacy” is featured as the credit soundtrack of the acclaimed documentary film “Take Back Your Power, 2013 and was also a top 10 regional finalist in CBC Radio’s 2014 Searchlight Contest.

Theda’s CDs are available for order or download here on the music page of her website, on iTunes, and at various stores in Vancouver, Canada.

Theda currently resides in Vancouver, BC .